There are many types of devices that are specific to WAN environments, including:

Note: The preceding list is not exhaustive and other devices may be required, depending on the WAN access technology chosen.

If the circuit carries computer data, the usage of this fixed capacity may not be efficient. For example, if the circuit is used to access the Internet, there is a burst of activity on the circuit while a web page is transferred. This could be followed by no activity while the user reads the page, and then another burst of activity while the next page is transferred. This variation in usage between none and maximum is typical of computer network traffic. Because the subscriber has sole use of the fixed capacity allocation, switched circuits are generally an expensive way of moving data.

The two most common types of circuit-switched WAN technologies are the public switched telephone network (PSTN) and the Integrated Services Digital Network (ISDN).

In contrast to circuit switching, packet switching splits traffic data into packets that are routed over a shared network. Packet-switching networks do not require a circuit to be established, and they allow many pairs of nodes to communicate over the same channel.

The switches in a packet-switched network (PSN) determine the links that packets must be sent over based on the addressing information in each packet. The following are two approaches to this link determination: 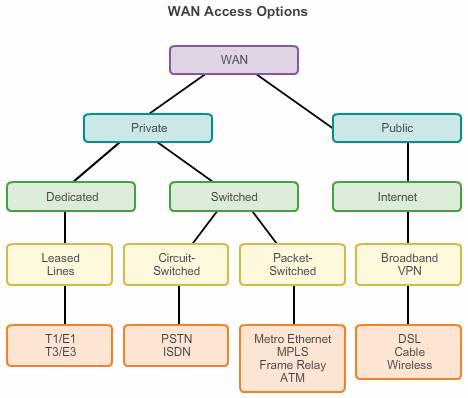 Note: SONET is an American-based ANSI standard, while SDH is a European-based ETSI and ITU standard. Both are essentially the same and, therefore, often listed as SONET/SDH.