EIGRP is still based on the key distance vector routing protocol principle, in which information about the rest of the network is learned from directly connected neighbors.

As the computational engine that drives EIGRP, the Diffusing Update Algorithm (DUAL) resides at the center of the routing protocol. DUAL guarantees loop-free and backup paths throughout the routing domain. Using DUAL, EIGRP stores all available backup routes for destinations so that it can quickly adapt to alternate routes when necessary.

EIGRP establishes relationships with directly connected routers that are also enabled for EIGRP. Neighbor adjacencies are used to track the status of these neighbors.

The Reliable Transport Protocol (RTP) is unique to EIGRP and provides delivery of EIGRP packets to neighbors. RTP and the tracking of neighbor adjacencies set the stage for DUAL.

EIGRP uses the terms, partial and bounded, when referring to its updates. Unlike RIP, EIGRP does not send periodic updates and route entries do not age out. The term partial means that the update only includes information about the route changes, such as a new link or a link becoming unavailable. The term bounded refers to the propagation of partial updates that are sent only to those routers that the changes affect. This minimizes the bandwidth that is required to send EIGRP updates.

PDMs are responsible for the specific routing tasks for each network layer protocol, including:

When a router discovers a new neighbor, it records the neighbor’s address and interface as an entry in the neighbor table.

EIGRP uses Reliable Transport Protocol (RTP) for the delivery and reception of EIGRP packets. EIGRP was designed as a network layer independent routing protocol; because of this design EIGRP cannot use the services of UDP or TCP. This allows EIGRP to be used for protocols other than those from the TCP/IP protocol suite. 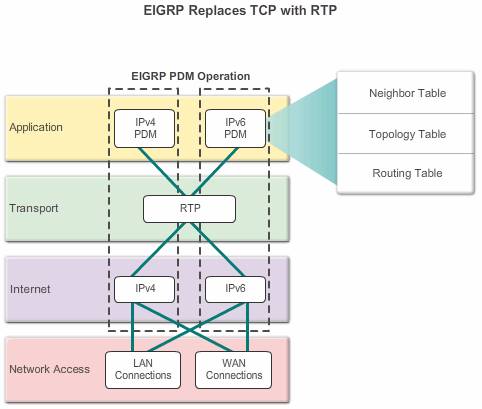 RTP can send EIGRP packets as unicast or multicast.

EIGRP uses five different packet types, some in pairs. EIGRP packets are sent using either RTP reliable or unreliable delivery and can be sent as a unicast, multicast, or sometimes both. EIGRP packet types are also called EIGRP packet formats or EIGRP messages.

EIGRP Hello packets are sent as IPv4 or IPv6 multicasts, and use RTP unreliable delivery. This means that the receiver does not reply with an acknowledgment packet.

EIGRP also uses Hello packets to maintain established adjacencies. An EIGRP router assumes that as long as it receives Hello packets from a neighbor, the neighbor and its routes remain viable.

EIGRP uses a Hold timer to determine the maximum time the router should wait to receive the next Hello before declaring that neighbor as unreachable. By default, the hold time is three times the Hello interval, or 15 seconds on most networks and 180 seconds on low-speed NBMA networks. If the hold time expires, EIGRP declares the route as down and DUAL searches for a new path by sending out queries.

Unlike RIP, EIGRP (another distance vector routing protocol) does not send periodic updates and route entries do not age out. Instead, EIGRP sends incremental updates only when the state of a destination changes. This may include when a new network becomes available, an existing network becomes unavailable, or a change occurs in the routing metric for an existing network.

EIGRP uses the terms partial and bounded when referring to its updates.

By sending only the routing information that is needed, only to those routers that need it, EIGRP minimizes the bandwidth that is required to send EIGRP updates.

3. Acknowledgment packets – Used to acknowledge the receipt of an EIGRP message that was sent using reliable delivery.

Note: Some documentation refers to the Hello and acknowledgment as a single type of EIGRP packet.

4. Query packets – Used to query routes from neighbors when searching for networks and other tasks.

5. Reply packets – Sent in response to an EIGRP query.

All neighbors must send a reply, regardless of whether or not they have a route to the downed network. Because replies also use reliable delivery, routers  must send an acknowledgment.

The data portion of an EIGRP message is encapsulated in a packet. This data field is called type, length, value (TLV). The types of TLVs relevant to this course are EIGRP parameters, IP internal routes, and IP external routes.

If the EIGRP packet is encapsulated in an Ethernet frame, the destination MAC address is also a multicast address, 01-00-5E-00-00-0A. 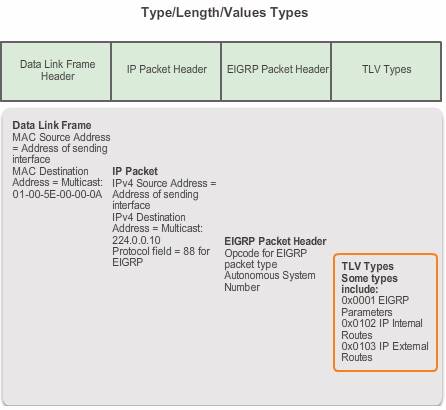 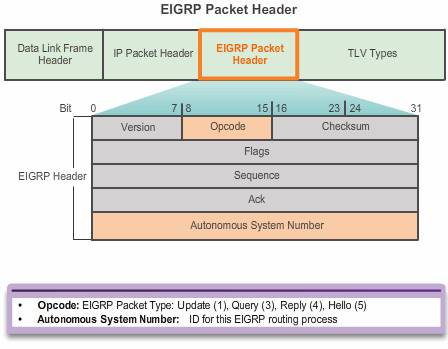 Every EIGRP message includes the header, as shown in Figure 1. Important fields include the Opcode field and the Autonomous System Number field. 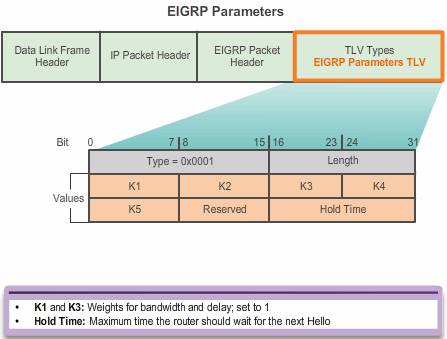 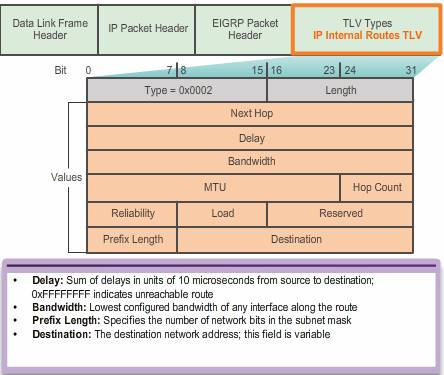 Figure above shows the IP Internal Routes TLV. The IP internal message is used to advertise EIGRP routes within an autonomous system. Important fields include the metric fields (delay and bandwidth), the subnet mask field (prefix length), and the destination field.

1, Delay is calculated as the sum of delays from source to destination in units of 10 microseconds. Bandwidth is the lowest configured bandwidth of any interface along the route.

3, The Destination field stores the address of the destination network. Although only 24 bits are shown in this figure, this field varies based on the value of the network portion of the 32-bit network address. For example, the network portion of 10.1.0.0/16 is 10.1; therefore, the Destination field stores the first 16 bits. Because the minimum length of this field is 24 bits, the remainder of the field is padded with zeros. If a network address is longer than 24 bits (192.168.1.32/27, for example), then the Destination field is extended for another 32 bits (for a total of 56 bits) and the unused bits are padded with zeros. 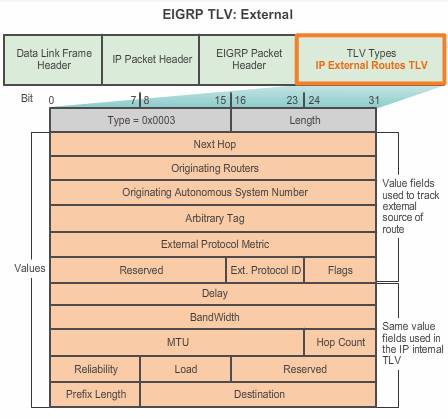 Note: The maximum transmission unit (MTU) is not a metric used by EIGRP. The MTU is included in the routing updates, but it is not used to determine the routing metric.