A network running CST (common spanning tree) has these characteristics:

For each VLAN in a switched network, PVST+ performs four steps to provide a loop-free logical network topology:

RSTP supports a new port type: alternate port( backup port) in discarding state. Notice that there are no blocking ports. RSTP does not have a blocking port state.
RSTP defines port states as discarding, learning, or forwarding.

Alternate port: Similar to the blocking ports in STP.

Port in the same collision domain, how to determine backup port?

To choose the designated port, the decision process involves the following parameters inside the BPDU:

RSTP can achieve much faster convergence in a properly configured network, sometimes in as little as a few hundred milliseconds. RSTP redefines the type of ports and their state. If a port is configured to be an alternate port or a backup port, it can immediately change to forwarding state without waiting for the network to converge. 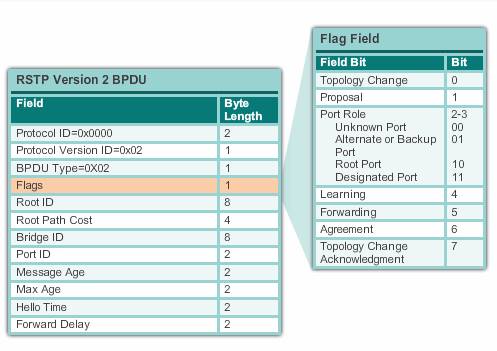 Configuring an edge port to be attached to another switch is not recommended. This can have negative implications for RSTP because a temporary loop may result, possibly delaying the convergence of RSTP.

Depending on what is attached to each port, two different link types can be identified:

The link type can determine whether the port can immediately transition to forwarding state, assuming certain conditions are met. These conditions are different for edge ports and non-edge ports. Non-edge ports are categorized into two link types, point-to-point and shared. The link type is automatically determined, but can be overridden with an explicit port configuration using the
spanning-tree link-type parameter command.

Characteristics of port roles with regard to link types include the following: 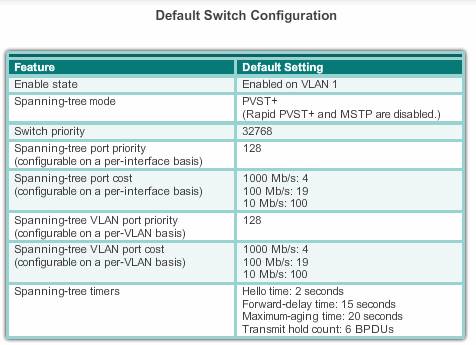 To ensure that the switch has the lowest bridge priority value, use the
S1(config)# spanning-tree vlan vlan-id root primary

command in global configuration mode. The priority for the switch is set to the predefined value of 24,576 or to the highest multiple of 4,096, less than the lowest bridge priority detected on the network.

If an alternate root bridge is desired, use the
S1(config)#spanning-tree vlan vlan-id root secondary

To configure PortFast on a switch port:
S1(conf-if)# spanning-tree portfast

Enables PortFast on all non-trunking interfaces:

BPDU guard.
When it is enabled, BPDU guard puts the port in an error-disabled state on receipt of a BPDU. This will effectively shut down the port. The BPDU guard feature provides a secure response to invalid configurations because you must manually put the interface back into service.

Step 2. After discovering the Layer 2 topology, use STP knowledge to determine the expected Layer 2 path. It is necessary to know which switch is the root bridge.

Step 3. Use the show spanning-tree vlan command to determine which switch is the root bridge.

Step 4. Use the show spanning-tree vlan command on all switches to find out which ports are in blocking or forwarding state and confirm your expected Layer 2 path.